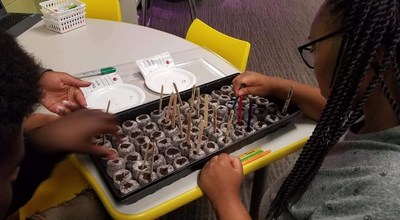 The iceberg is melting. A young would-be scientist reaches out to the International Space Station, asking for a photo when its orbit passes overhead the next day. Later, she downloads the picture and compares it to one from last year to figure out how quickly the iceberg is shrinking.

Kids and teens are conducting experiments like the popular “EarthKAM” across the country this summer. In honor of the 50th anniversary of the Apollo 11 moon mission, Raytheon and the John F. Kennedy Library Foundation launched JFK Space Labs in Boys & Girls Clubs nationwide. But this isn’t just youth STEM education — it’s real science.

Inspired by programs through the Space Station Explorers network, which is the ISS U.S. National Laboratory education portal, the JFK Space Labs carry on Kennedy’s legacy and his spirit of inspiration. The experiments available to young explorers are varied. At the Boys & Girls Club, youth are growing seeds that have been in space in “Tomatosphere,” studying how animals react in zero gravity in “Orion’s Quest,” and requesting photos of our changing world in “EarthKAM.” And while they’re also listening to astronauts on the ISS read aloud STEM-based books in “Story Time From Space,” the difference here is these experiments aren’t busywork.

The kids and teens are acting as citizen scientists, giving their data to researchers, scientists and astronauts to help grow mankind’s collective knowledge. To the teens in particular, doing something larger — like learning how to best grow food in space or the effects of climate change — is an eye-opening lesson that no career is off limits.

“As the youth are collecting data, they’re wondering if the seeds have been exposed to radiation, and if they grow faster or slower. To them it’s like, is this the Spider-Man of tomato plants?” said Susan Ciavolino, director of youth development program education and STEM, Boys & Girls Clubs of America. “It feels different to be having fun while doing a task, you’re engaged. You’re doing something real.”

The JFK Space Lab program is funded through a $1.5 million gift from Raytheon to the JFK Library Foundation. That includes providing schools and after-school programs nationwide with a curated set of free experiments, and the choice of five schools to receive a JFK Space Lab at the start of the 2019–2020 school year all with support from the ISS National Lab. Students will grow plants with special cameras and sensors, perform DNA analysis with professional equipment, and even venture outdoors with antennas and other software to attempt radio contact with the ISS and other entities.

The John F. Kennedy Library Foundation and ISS National Lab will discuss the JFK Space Lab program efficacy at the ISSRDC in Atlanta, Georgia, on Thursday, August 1. They joined Raytheon in awarding ten participating Boys & Girls Clubs with astronaut and augmented reality experiences to help expand their exploration of space, including ham radio conversations with ISS astronauts facilitated by ARISS (Amateur Radio on the International Space Station). To learn more about the program visit https://www.jfklibrary.org/jfk-space-labs.

About Raytheon
Raytheon Company, with 2018 sales of $27 billion and 67,000 employees, is a technology and innovation leader specializing in defense, civil government and cybersecurity solutions. With a history of innovation spanning 97 years, Raytheon provides state-of-the-art electronics, mission systems integration, C5ITM products and services, sensing, effects, and mission support for customers in more than 80 countries. Raytheon is headquartered in Waltham, Mass. Follow us on Twitter.

About Boys & Girls Clubs of America
For more than 150 years, Boys & Girls Clubs of America (BGCA.org) has enabled young people most in need to achieve great futures as productive, caring, responsible citizens. Today, more than 4,600 Clubs serve over 4.7 million young people through Club membership and community outreach. Clubs are located in cities, towns, public housing and on Native lands throughout the country, and serve military families in BGCA-affiliated Youth Centers on U.S. military installations worldwide. They provide a safe place, caring adult mentors, fun and friendship, and high-impact youth development programs on a daily basis during critical non-school hours. Club programs promote academic success, good character and citizenship, and healthy lifestyles. In a Harris Survey of alumni, 54 percent said the Club saved their lives. National headquarters are located in Atlanta. Learn more at Facebook and Twitter.

About the International Space Station (ISS) U.S. National Laboratory
In 2005, Congress designated the U.S. portion of the ISS as the nation’s newest national laboratory to optimize its use for improving quality of life on Earth, promoting collaboration among diverse users, and advancing science, technology, engineering, and mathematics (STEM) education. This unique laboratory environment is available for use by non-NASA U.S. government agencies, academic institutions, and the private sector. The ISS National Lab manages access to the permanent microgravity research environment, a powerful vantage point in low Earth orbit, and the extreme and varied conditions of space.