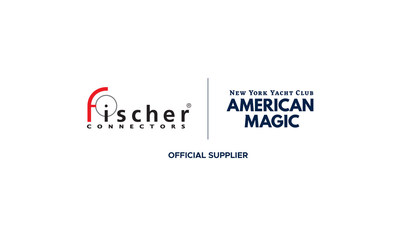 “The technical solutions and systems we are creating to win the America’s Cup are built in-house by American Magic’s engineering team, and Fischer Connectors is instrumental in many areas,” said Terry Hutchinson, Skipper and Executive Director of American Magic. “Through quality, reliability and innovation, Fischer Connectors makes our lives easier and our boats faster.”

American Magic is utilizing the Fischer FiberOptic Series and the Fischer MiniMax™ Series in several projects, along with the Fischer Freedom™ Series.

Alain Lafourcade, President of Fischer Connectors, Inc., said he was proud that the high-technology connectivity solutions provided by Fischer Connectors have a place with the American Magic. “We are honored that Fischer Connectors is sponsoring one of the top sailing teams in the world. Our engineers really enjoy working on challenging applications like the American Magic. The project says a lot about how our connectivity solutions stand up to extreme conditions. We cheer for the success of all our customers, and in this case, I’m looking forward to seeing what else we can do to help the team on their journey to New Zealand in 2021.”

American Magic is currently training in Rhode Island, near the New York Yacht Club’s Harbour Court clubhouse in Newport. The team will participate in the upcoming America’s Cup World Series, which includes multiple events planned for 2020. In early 2021, the team will compete in Auckland, New Zealand in the Prada Cup, the Challenger finals. The winner of the Prada Cup will face the Defender of the America’s Cup, Emirates Team New Zealand, in the America’s Cup Presented by Prada from March 6-21, 2021.

For more than 60 years, the people of Fischer Connectors have been reimagining connectivity. Every day, over 550 employees around the world work to create innovative connectivity solutions that help design engineers around the world turn ambitious ideas into success stories. Fischer Connectors’ 30,000 square foot facility near Atlanta, GA is ISO 13485 certified and ITAR registered.  It is home to our expert engineering, quality, customer service and supply chain teams.  We provide support for the Americas through a network of regional sales managers, distributors and independent agents and work closely with our headquarters operation in Saint-Prex, Switzerland to provide innovative products and expert, reliable service to our customers.

Primary design and manufacturing facilities are located in Saint-Prex, Switzerland.  In addition to the North American subsidiary and agent/distributor network, there are seven subsidiaries and many other distributors located worldwide. www.fischerconnectors.com

Formed in October 2017 by Bella Mente Racing, Quantum Racing and the New York Yacht Club, American Magic brings together two highly successful racing programs with one of the foremost yacht clubs in the world. The team represents a shared vision of launching a campaign for the 36th America’s Cup competition, reconnecting the American sailing base with sailing’s premier event and elevating the quality of competitive sailing in the United States.