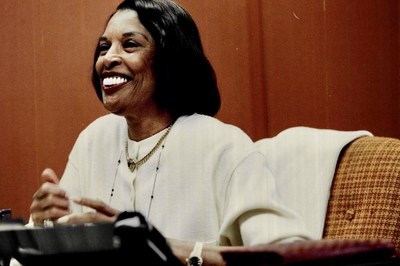 Joan B. Johnson, philanthropist, entrepreneur and co-founder of Johnson Products, bequeathed a $1 million gift to Spelman College in support of future scientists.

Johnson, who passed away Friday, Sept. 6, 2019, served as the treasurer of Johnson Products, one of the first haircare brands developed for African Americans and the first Black-owned business traded on the American Stock Exchange.

“We celebrate Mrs. Johnson for her shared spirit, commitment and service to the College’s mission, embracing Spelman sisters and serving as a model for future servant-leaders,” said Mary Schmidt Campbell, Ph.D., president of Spelman.

The gift will be used to support scholarships for students majoring in STEM fields, as well as for renovating instructional spaces on campus.

Johnson was appointed to the Spelman College Board of Trustees in 1982 and served during the tenure of two Spelman presidents, Donald M. Stewart, Ph.D., and Johnnetta Betsch Cole, Ph.D.

Her support for Spelman was demonstrated through generous financial contributions, as well as the donation of a portrait collection named “The Great Beautiful Black Women” to the Spelman College Museum of Fine Art. Johnson’s strong affinity for the College led to the matriculation of two of her beloved granddaughters, Erin Marie Johnson Tolefree, C’2001, and Cara Joan Johnson Hughes, C’2003.

Along with her husband, George, Johnson turned a $250 investment into a multimillion-dollar corporation. Credited with bringing the culture of integrity to Johnson Products, she contributed that same business innovation and acumen as a Spelman trustee focused on the well-being of students and providing them with a quality education.

Founded in 1881, Spelman College is a leading liberal arts college widely recognized as the global leader in the education of women of African descent. Located in Atlanta, the College’s picturesque campus is home to 2,100 students. Spelman is the country’s leading producer of Black women who complete Ph.D.s in science, technology, engineering and math (STEM). The College’s status is confirmed by U.S. News and World Report, which ranked Spelman No. 57 among all liberal arts colleges, No. 22 for undergraduate teaching and No. 6 for both innovation and social mobility among liberal arts colleges, and No. 1 for the 13th year among historically Black colleges and universities. The Wall Street Journal ranked the College No. 3, nationally, in terms of student satisfaction. Recent initiatives include a designation by the Department of Defense as a Center of Excellence for Minority Women in STEM, a Gender and Sexuality Studies Institute, the first endowed queer studies chair at an HBCU, and a program to increase the number of Black women Ph.D.s in economics. New majors have been added, including documentary filmmaking and photography, and partnerships have been established with MIT’s Media Lab, the Broad Institute and the Army Research Lab for artificial intelligence and machine learning. Outstanding alumnae include Children’s Defense Fund founder Marian Wright Edelman, Starbucks Group President and COO Rosalind Brewer, political leader Stacey Abrams, former Acting Surgeon General and Spelman’s first alumna president Audrey Forbes Manley, actress and producer Latanya Richardson Jackson, global bioinformatics geneticist Janina Jeff and authors Pearl Cleage and Tayari Jones. For more information, visit www.spelman.edu.