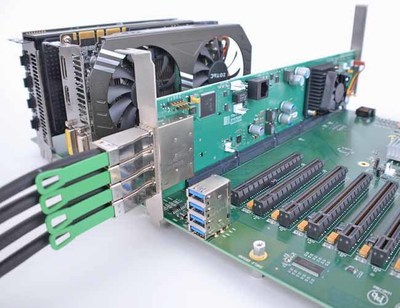 Trenton Systems, Inc., a manufacturer of rugged servers and workstations, storage servers, processor boards, and PCIe backplanes, is announcing a PCIe Expansion Kit which allows users to add up to 18 extra PCIe slots to their existing servers or systems using PCIe Gen3 speeds.

The PCIe Expansion Kit consists of the Target Card, Host Card, PCIe Cables, PCIe Backplanes, and rugged chassis in 3U, 4U or 5U form factors. The target card (PED8234) as well as the host card (MXH832) both feature quad SFF-8644 connectors which the 1m or 3m PCIe cables use to communicate from host to target.

Trenton Systems’ low-profile target card measures 13.35″ by 2.83″, making it perfect for size constrained applications. Currently, you can select PCIe backplanes that offer up to 18 PCIe slots and sit in either a 3U, 4U or 5U rugged chassis. The best part is that the host card works with any system with an open x16 PCIe slot. It allows you to expand your PCIe slot capabilities no matter what server or workstation you’re using.

Bi-directional throughput speed clocks in at 8GT/s between the host and target system and the added RJ45 GbE port enables remote management and control of your target system with both activity and speed LEDs. A unique feature if you do not have it built into the host system.

“The great thing about our PCIe Expansion Kit is that it gives you a ton of PCIe slots,” says Keifer Sims, Strategic Account Manager at Trenton Systems, “especially now that we see higher and higher demands for it. We have customers that already utilize all 18 PCIe slots asking to expand by yet another 18. The demand is there. Now, we have a product for that demand.”

Keep in mind, the PCIe Expansion Kit uses any open x16 PCIe slot. Let’s say your current setup has 5 free x16 slots, that means you can potentially expand each one of them with a backplane that hosts 18 slots. That’s 90 PCIe slots total!

Trenton Systems is also actively working on designing a 2U rugged chassis to work with the low-profile expansion card.

The PCIe Expansion Kit goes on sale today and qualifies for the Loaner Program where you can borrow any ruggedized computer or component free for 45 days. No strings attached.