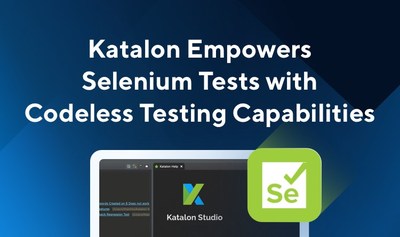 Katalon, Inc., provider of the world’s leading test automation solution, announced its latest feature release to support the migration of Selenium test scripts to Katalon Studio’s testing platform. This feature is made to simplify the testing process for QA teams and make automation approachable for all businesses with or without programming expertise, making it the ideal alternative solution for Selenium.

“Katalon has shown steady growth in recent years, and that is an outcome of our constant effort to improve Katalon’s adaptability and extend the scope of testing for our users,” said Dzung Ngo, VP of Product at Katalon. “We understand that testing with applications like Selenium is complicated and requires a significant amount of resources and effort from teams. This migration feature is one step closer to make Katalon the perfect alternative to Selenium, thus, simplifying the journey of automation better,” he added.

Built on top of Selenium’s platform, one of Katalon’s key missions is to address the challenges and limitations of applying test automation for teams at any scale, with any level. Katalon Studio effectively solves Selenium’s common issues. For instance, the tool offers SmartWait to solve Selenium’s WebDriverWait issue, requires no setup process, compatible with all platforms regardless of application complexity, and more.

Katalon Studio, with its codeless testing capabilities, makes automation achievable for teams that are still held back by the much-needed programming skills and self-build nature of Selenium. By going codeless, it shortens the time and the length of the learning curve for QA professionals without limiting the testing capability for businesses.

After the migration of Selenium test cases, users can then leverage Katalon Studio to enable CI/CD integrations, cloud testing, and smart analytics without having to start from scratch.

See Katalon Documentation for detailed tutorials on how to migrate Selenium tests here.

Katalon is a leading provider in software test automation solutions. The company offers a flexible platform for web, API, mobile, and desktop testing that fits teams and projects of any size, for any purpose — from creating tests, execution, reports, to seamless integration with the CI/CD ecosystem.

Katalon is widely adopted by a global community of users across 160+ countries. It is recognized as a top automation tool by prestigious reports such as Gartner, Capterra, and IT Central Station. Katalon solutions include Katalon Studio, Katalon TestOps (beta), Katalon Recorder, Katalium, and Katalon plugins. For more information, visit https://www.katalon.com.