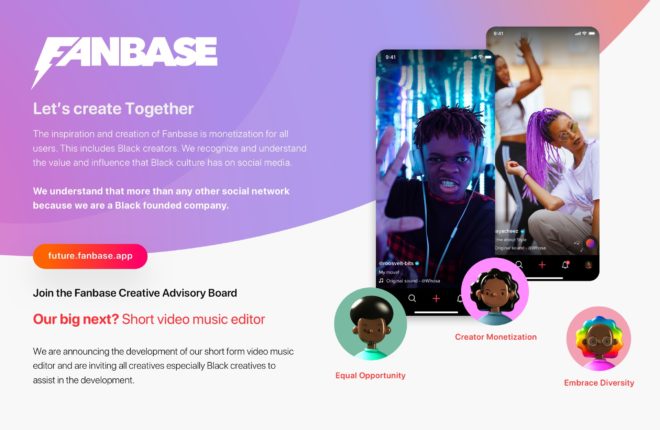 Fanbase, the subscription-based social platform just closed its $3.5 Million Dollar seed round, and empowers any user to monetize their content, unveiled today plans to roll out a new, short form video and music editor function in tandem with the formation and launch of its “The Future Of Fanbase” Creative Advisory Board to support development.

In response to the current Black TikTok creator strike coupled with disparities pervading the entire creator economy, Fanbase is calling on all creatives – especially Black creatives – to weigh in on the design of the new video function through the creation of its new advisory board. Through a safe space provided to these creators, many of whom experience inequities in the market, Fanbase hopes to further build out its platform tailored to the needs of creatives who are often left behind or not given credit or provided monetary compensation for their contributions to this ever-evolving and growing space.

“For the past year there has been consistent evidence by Black creators that their content is undervalued, appropriated and banned because of their skin color across all social media platforms. Black culture, creators and content are at the heart of pop culture. These creators who invent the dances or challenges that drive content on these platforms deserve to be paid and recognized as much as their counterparts – if not more.” Said Isaac Hayes III, founder and CEO of Fanbase. “This is what we’re about at Fanbase. As a Black-founded and led company, the core of our platform and its features are designed to facilitate an equal and profitable structure for all users, including young Black creators.”

Fanbase is specifically designed to upend the monetization disparities in today’s booming creator economy. Fanbase’s latest platform advancements are rooted in three pillars: Fanbase content will include monetization for all users; visibility and engagement will not be regulated based on skin color and algorithms that throttle or ban by race and color will not be part of its design; and Fanbase is committed to constantly evolving to innovate – central to why the company is inviting the creator community to assist with this process.

Founded in 2018 by entrepreneur Isaac Hayes III, Fanbase is the subscription-based social platform that empowers creators to monetize their content and grow their fanbase. Rooted in community, Fanbase is the first native app with full content monetization, including audio rooms. Gamification features such as virtual currency — “Love” —  enable fans to reward their favorite creators.  The combined monthly subscription fee and virtual currency revenue model offers a gateway for users to unlock exclusive content. The social platform is compatible with IOS and available in the U.S., U.K., Canada and Australia. For more information, visit https://www.fanbase.app.