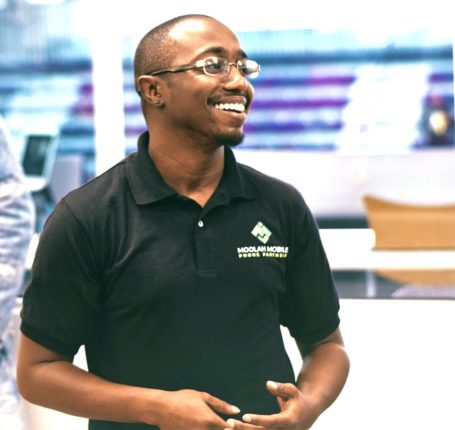 Moolah Wireless is giving away $1 million worth of computer tablets and service to eligible customers in underserved communities across the country in partnership with a new federal program, the Affordable Connectivity Program (ACP). This year, the internet service provider is giving away thousands of free Moolah Mobile branded Android Tablets which included free wireless connectivity for students in college and in K-12 throughout the United States.

“Our company’s core mission is to provide underserved communities with affordable, high-quality broadband, especially students whose education depends upon consistent access to the internet. We want to help close the digital divide,” said Moolah Wireless 32-year-old Founder and CEO Vernell Woods. “We are proud that we are giving away $1 Million worth of tablets to college and K-12 students as part of the federal government’s new Affordable Connectivity Program.

Moolah Wireless, a new company that has been partnering with colleges, secondary schools, churches, and non-profits across the nation to enroll qualified customers in the new ACP program in which each household can receive a brand-new Moolah Mobile Android 12 Wireless Tablet with 12 months of free service provided by Moolah Wireless. The Moolah Mobile devices come pre-installed with custom software, where users can elect to earn up to $50 per month for viewing advertising on their home screen.

Earlier this year, the Federal Communications Commission (FCC) selected Moolah Wireless, a mobile virtual network operator, as one of its partners in implementing the $14.2 billion Affordable Connectivity Program with the goal of closing the digital divide gap for poor and underserved communities throughout the nation. The ACP is part of President Biden’s Infrastructure Investment and Jobs Act created at the end of 2021.

To qualify for a Moolah Mobile tablet and service, eligible customers’ income must either fall within federal poverty guidelines or they must provide proof that they receive any of the following benefits: Free lunch programs, Supplemental Security Income, Medicaid or Medicare, SNAP, Veteran’s Pension, Federal Public Housing Assistance, Section 8 or Pell Grant.

Moolah Wireless has recently distributed its tablets in places such as Paine College in Augusta, GA, Morris Brown College in Atlanta and in Wichita, KS in partnership with the non-profit Storytime Village at the Century II Performing Arts & Convention Center.  Currently, Moolah Wireless is finalizing the schedule for locations for its tablet give aways during the first quarter of 2023.

“We were delighted to work with Moolah Wireless to provide our eligible Pell Grant students over 200 Android Tablets and free wireless service” said Helene Carter, VP of Institutional Advancement at Paine College. “The tablets and free service gave valuable access to our students who attend classes and access assignments in the virtual environment. To our satisfaction, the Moolah software synced easily with Paine’s virtual classroom delivery program. Moolah is providing a valuable service to institutions such as HBCUs where large populations of students do not own personal laptops and tablets. We look forward to working with Moolah Wireless to expand access for future Paine enrollees.”

To learn more about Moolah Wireless and how to apply for a free tablet, go to www.MoolahWireless.com.

Moolah Wireless is a mobile virtual network operator based in Atlanta. Its goals are to empower communities with affordable, high quality and safe internet services. Moolah Wireless is a member of the Federal Communications Commission “Affordable Connectivity Program” which provides funding for computer devices and internet service for underserved communities. The company’s investors include Grammy award-winning rapper, Clifford “T.I.” Harris, who is also a partner, and its celebrity endorsements include actor Hill Harper (ABC’s “The Good Doctor”) and actor Malik Yoba (“Designated Survivor” and “New York Undercover”). Recent press about the company appear in Storytime Village Hands Out Tablets for Kids and Black Enterprise – Rapper TI Backed StartUp