GA-based fintech company, Novae LLC, announced this week that it has been named to the renowned Inc. 5000 list of fastest growing companies in America for the second consecutive year. 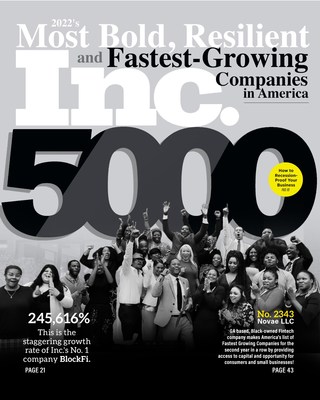 This is perhaps not surprising, given that Novae has been rolling out new major product offerings every few months since early 2021. Since becoming the first Black-owned alternative to Buy Now Pay Later giants such as Klarna in July of 2021, Novae followed this with a major announcement in August of 2021 releasing their own no-fee Online Banking platform. Novae Online Banking allows users to create FDIC-insured bank accounts entirely online while making cash deposits and withdrawals at over 20 common businesses such as 7-Eleven, Walgreens, and Dollar General locations.

In 2022, Novae placed more focus on increasing its partnerships to serve consumers nationwide by adding over 30 new lenders to their consumer loans application platform. Someone can submit one personal loan application on Novae’s website, without affecting their credit, and be considered by over 30 lenders instantly, at no cost to the consumer. Novae’s technology displays several offers on the screen for credit-worthy consumers and the consumer can decide the best loan offer for them. Thereafter, the lender and the consumer work directly with each other.

Over the past few months in 2022, Novae has released other embedded financial solutions for consumers that include life insurance, credit cards, savings accounts, money market accounts, student loan refinance, and auto loan refinance offerings. Because of the robust platform Novae has managed to build, it allows the firm to connect seamlessly to several of the top financial services companies in the country, providing their customers with many of the best options available for them.

This summer Novae also announced the creation of the nonprofit Novae Cares. Novae Cares had its inaugural celebration by offering free festivities, kids haircuts/braiding, food, and school supplies to hundreds of students and senior citizens in Novae CEO, Reco McCambry’s hometown of McDonough, Georgia, where he has a day named in his honor. This first annual Deborah Ann Watson Memorial Weekend was named in honor of his late mother.

This year more than ever, McCambry has made it clear that his priority is to promote equal access to wealth and finance in American communities suffering from the legacy of discrimination. All of Novae’s offerings are designed to make access to financing and financial education easier for individuals and business owners who have historically been underserved by financial institutions.

In his keynote speech at this year’s Money2.0 Las Vegas conference, McCambry outlined this mission as a business strategy. “When we reach markets of customers who have previously been underserved,” McCambry told the gathered crowd of business owners and investors, “we grow our market share. The underserved markets are where the opportunities are in this era of digital finance.”

You can’t argue with results. After two years of incredibly rapid growth and expansion into new markets, we can expect Novae LLC to appear on the Inc 5000 for many years to come.