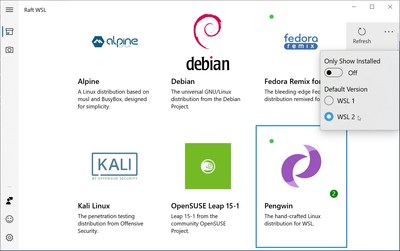 Whitewater Foundry (https://www.whitewaterfoundry.com/) recently acknowledged the upcoming Microsoft Windows 10, version 2004 update, which will include significant changes to WSL, effectively upgrading it to WSL2. WSL is a crucial compatibility layer used for running Linux binaries natively in a console environment on Windows 10 and makes managing Linux distros easy on a Windows 10 device. Whitewater Foundry developed a critically useful app, “Raft,” to help professionals install, update, run, terminate and uninstall WSL distros. Raft has been updated to reflect the newest WSL2 upgrades and is available for download at the Microsoft Store.

“Since WSL2 was first made available to Windows Insiders, we have been working in collaboration with insider users for ten months,” said Carlos Ramirez of Whitewater Foundry. “All of our products are now ready to squeeze the best out of what WSL2 can offer.”

Whether programmers use Raft WSL or the command line to migrate their distros, Pengwin, Fedora Remix for WSL, and Pengwin Enterprise will detect the new configuration and adapt to it; for example, the DISPLAY variable for graphical applications.

WSL2 provides a Linux-compatible kernel interface developed by Microsoft and allows a user to choose a Linux distribution to install from the Microsoft Store. A Linux distribution provides binary package management in a contained environment, while WSL2 offers an interface to mount Windows drives within WSL2. WSL2 will continue to be routinely used by developers, engineers, students, and anyone who wants to run Linux tools on Windows. The newest upgrades to Raft allow users to experience the most that WSL2 has to offer, like easily migrate distros and full WSL2 support. Other features of the Raft update include: