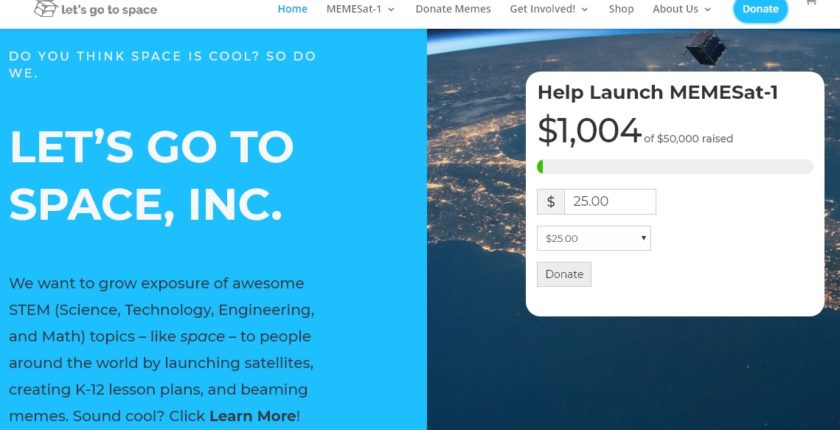 As we watch Atlanta’s tech scene continue to thrive, many in our region have set their collective gaze to space: Georgia touts itself as a prime environment for space-related businesses; the aerospace industry employs nearly 200,000 workers in the state; and its leading universities conduct research and educate the next astrophysicists and aerospace engineers.

Others are focusing on education and inspiring the next generation of astrophysicists. Among them is Warren Eshpeter, creator of the Atlanta nonprofit Let’s Go to Space, Inc. and a Georgia Institute of Technology-trained aerospace engineer who is applying his expertise toward the creation of a satellite that will transmit memes from space.

Yes, memes—as in the often-funny, sometimes-introspective images that capture distinct moments in our culture and society; the images with succinct captions that seem as numerous as the stars in the night sky. Those memes.

While Eshpeter admits that the memes serve more as a promotional tool, his project and the goals of Let’s Go to Space are much loftier. Incorporated in early 2020, the organization seeks to lower the barrier to enter space and to inspire future generations of engineers and scientists. It will bring science outreach to schools and engage students through hands-on experiments related to satellite technology. Along with the batch of memes that will travel on MEMESat-1—the Mission for Education and Multimedia Engagement, the name of the organization’s 1U amateur radio CubeSat and first satellite launch—Eshpeter and Let’s Go to Space will support academic research and conduct legitimate scientific endeavors.

Eshpeter said he wants to show children that careers in aerospace engineering, astrophysics, and computer science are not unattainable goals.

“If a goofy kid like me who’s definitely not the smartest one in any of my classes can go through and launch a company and start sending satellites into space, then I think it’s very achievable for anyone to do,” he said.

Origins of Let’s Go to Space and MEMESat-1

Eshpeter’s journey toward the creation of his organization started during his time as an undergraduate at the University of Georgia. While he and his friends were conducting research at UGA’s Small Satellite Research Laboratory, they jokingly thought about building a satellite that can transport memes into space. Over time, what started as a joke began to evolve: Eshpeter began to realize that this was a project he could bring to life, with the purpose of educating children, funding research, and accomplishing things that can have a greater impact on society.

As Eshpeter continued his aerospace engineering education at Georgia Tech—where he will graduate this semester—he sought advice from business professors at the university about launching his concept. One professor suggested that forming a nonprofit would be more advantageous and not too much more difficult than starting a traditional LLC.

“It did turn out a little bit harder than I would have imagined, but you know, we’re incorporated, we’re there, and we’re cruising now,” Eshpeter said.

Let’s Go to Space is currently partnered with UGA, and Eshpeter hopes that his organization will someday hire engineers that can coordinate with research programs at other universities.

MEMESat-1 is currently under construction at UGA by a team of students, Eshpeter said. Unlike traditional satellites that are the size of a school bus and cost hundreds of millions of dollars, CubeSats like MEMESat-1 are only as big as a loaf of bread and cost around $150,000 to make. CubeSats are gaining popularity with schools, tech demonstrations, and industry in general because they allow researchers to test new technology and conduct science without the elevated risk and costs associated with traditional space missions. And several CubeSats can literally hitch a ride on a larger rocket, further reducing the financial burden of a mission and making space research more attainable.

“It’s interesting talking about space with an audience that doesn’t know about space because everybody looks at [it] like ‘this is really hard to do,’” Eshpeter said. “But to an aerospace engineer, it’s just ‘normal’ hard.”

Even with a smaller satellite mission like MEMESat-1, Eshpeter said it requires extensive environmental testing to ensure that the satellite’s hardware, electronics, and batteries can handle the rigors of space. The project also necessitates “a lot of paperwork,” he said. “There is a ton of paperwork to put things in space.”

Eshpeter said he expects MEMESat-1 to launch no later than the Spring of 2022; but he believes the expertise of his team and the processes they have in place can get the satellite in the air by late 2021.

And Eshpeter continued to graciously answer this reporter’s persistent questions about the memes, the one component of the project the reporter actually understands.

“Once we establish contact a few days after launch or within a few hours of launch, we should be able to start beaming down memes ASAP,” Eshpeter said, reassuringly.

Getting the Word Out

In the meantime, Eshpeter will continue to introduce the public to Let’s Go to Space and MEMESat-1. He hopes to bring kits into classrooms that help students to learn about circuits and soldering, allowing them to build an inexpensive satellite-tracking ground station with an LED board that blinks when MEMESat-1 is overhead and transmitting information.

“That really brings into the classroom [that] there is something in space that’s actually communicating to this, and it brings space down to the classroom for the kids,” Eshpeter said. “And I think that would be really neat to do.”

Let’s Go to Space is also launching a Kickstarter campaign in March with the intent of raising the $30,000 needed to construct and test the satellite. Eshpeter said that building the satellite in-house will reduce expenses, and the organization will offer rewards including shirts and stickers for those who support the project.

From Atlanta to Outer Space

“These people were my superheroes,” he said. “They’re sending things to space.”

As he went through elementary, middle, and high school in the Roswell and Woodstock areas, Eshpeter said he had fantastic teachers, which contributed to his desire to give back to the community.

Eshpeter cited the importance of Atlanta to his work and aerospace in general, noting that Atlanta is one of the top tech hubs in the nation. He noted that one of his organization’s directors, Skyler Shuford, is a founder of Hermeus, a hypersonic transport aircraft startup; SpaceWorks Enterprises, DataPath, and IntelSat are just a few of the Georgia companies working on space technology. The Georgia Department of Economic Development notes that UGA is working on projects supported by NASA and the Air Force, and Georgia Tech produces the most aerospace engineers in America.

“With Georgia Tech nearby, you have no shortage of kids who are exceptionally smart and well-trained in aerospace engineering,” he said. “There’s a lot going on in Atlanta in tech right now, and it’s great to be in the boom of it all.”

Find more information about Let’s Go to Space, MEMESat-1, and making a donation to the mission at letsgo2space.com.