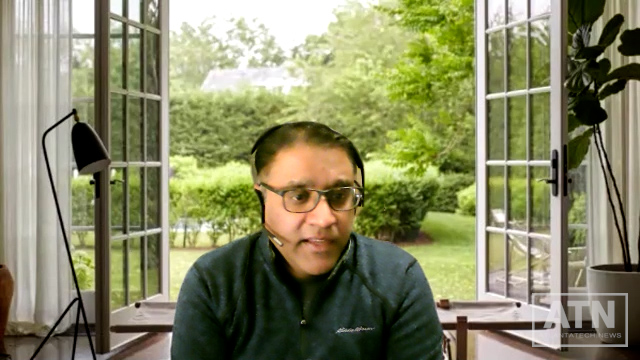 After Anand Srinivasan graduated from school in Washington, D.C., he was drawn to pursue a job opportunity in Atlanta as the city basked in the glow of the 1996 Summer Olympics. Like many others, he saw a city on the rise, a place with energy and beauty, but without the high cost of living found in the Northeast. Since then, Srinivasan has witnessed the development of the region’s technology scene; he shared his observations with Atlanta Tech News, as well as his role with technology professional services company Intelegencia and involvement with the Alpharetta Chamber of Commerce.

Working at Intelegencia, and Building Relationships in Alpharetta’s Tech Community

Srinivasan joined Intelegencia six months ago as Senior Vice President of North America Operations. His goal is to establish a physical presence for the company in Atlanta, though the coronavirus pandemic has delayed the opening of the office. By early 2022, he expects to have a staff of 30 to 40 workers that will coordinate with hundreds of Intelegencia team members overseas supporting over 100 clients worldwide.

Before coming to Intelegencia, Srinivasan gained leadership experience with companies like Ernst & Young, McKesson, and Microsoft and across industries including energy, financial services, and healthcare. And during a 15-year hiatus from his consulting work to raise his children—Srinivasan emphasized the importance of family to his personal values—he informally maintained connections with members of Atlanta’s technology community.

To help Intelegencia build relationships with the area’s technology community, Srinivasan recently joined the Alpharetta Chamber of Commerce’s Board of Directors. He spoke highly of Alpharetta’s business climate, referring to the city as “Atlanta’s Silicon Valley” because of its ability to attract technology companies.

“We decided to come in at the board level to show our investment in the city of Alpharetta and demonstrate our commitment to growing the business here and supporting the community,” he said.

Throughout his two decades in Atlanta, Srinivasan has watched the region’s evolution as a national technology hub. Though Atlanta has seen its share of technology business success, Srinivasan suggests changes to culture and mindset can help the region better support higher numbers of these companies.

“It’s more of a coolness factor,” Srinivasan said, adding that Silicon Valley tends to attract a culture around tech, which in turn brings venture capital, talent, and the impactful advances in technology. He thinks that Atlanta’s tech culture can closer resemble places like San Francisco and Austin with more home-grown successes and government policies around tech incubation.

Atlanta may also distinguish itself by specializing as a hub of back-office technology, which businesses rely on to manage finances, inventory, human resources, and other operations. McKesson, where Srinivasan worked for 10 years, had previously moved its back-office operations from San Francisco to Atlanta, he said. Because of its location, Atlanta can support back-office operations along the East Coast while serving as a bridge to customers in Europe and Asia.

“Atlanta has been a hub for that kind of technology, where it’s not necessarily cutting-edge, not necessarily products, but definitely important and vital for businesses to operate,” he said.

Alpharetta as a Hub in its Own Rite

Srinivasan suggests that in certain ways, Alpharetta is to Atlanta like San Jose is to San Francisco. Atlanta is more of a financial hub, and Alpharetta is more focused on technology growth. He thinks Alpharetta is in a “sweet spot” at the center of Atlanta’s northern suburbs, with a highly-educated, high-income tech workforce.

In recent years, Alpharetta has worked to attract a younger and more vibrant tech community with mixed-use development, apartment-style living, a thriving restaurant and bar scene, and other improvements that offer sophisticated, urban-style living, Srinivasan said. While other communities do not want the traffic that comes with additional business investment, he added, Alpharetta has never shied away from the challenge.

Going forward, Srinivasan sees talent retention as a priority for Alpharetta and the Atlanta tech scene as a whole, with many of its young people being drawn to plentiful tech opportunities to the West and Northeast. “We have some of the best schools in the country in the Alpharetta area. We have some of the best universities in terms of producing top talent, but they all end up leaving.” Georgia is among many states that experience this “brain drain,” or the departure of highly educated residents.

But Srinivasan sees a solid foundation in place, noting the region’s cost-of-living advantages, diverse economy, and educational opportunities. “The culture is a lot stronger now than it has been in prior years,” he said.